The junior football season got shaken up this season when 2 undefeated teams went head to head. The Elmira lancers were facing the seemingly unbeatable Jacob Hespeler Hawks on Thursday, October 27th.

The Hawks had a 4th quarter lead of 14-10, until Dylan Burkholder hauled in a touchdown pass from quarterback Kyler Bowman

When asked about the win and what the energy was like, this is what head coach Alex Derma had to say, “the energy was awesome, it felt great to know we can play with them and make a game of it.”

That win for Elmira breaks a 59-game winning streak for Jacob Hespeler, dating back to 2014.

Elmira completed their undefeated regular season and beat WCI in the semi-finals to have a rematch with Jacob Hespeler.

In the finals, The Lancers had a spectacular game, beating Jacob Hespeler 17-7. Running back Sam Lageer had a great game, scoring both touchdowns for Elmira. Keaten Kidd also had a spectacular performance, racking up 2 interceptions to help the Lancers win it all.

Elmira has been spectacular this season, going unbeaten to this point and being led by star players like Karsten Smith, Who plays running back, middle linebacker, punter and kicker. He scored 4 touchdowns this season including a scoop and score against Jacob Hespeler in their regular season match.

Another key contributor is their returning quarterback Kyler Bowman. The grade 10 continues his great junior football career after leading Elmira to the semi-finals last year where they lost to Jacob Hespeler.

Coach Alex Derma had high praise for the quarterback saying, “it always helps to have a returning quarterback, we had him in grade 9 and he lead us to the semis’ and hopefully this season he can take us further.”

Don’t think I’ve forgotten about defence. Peter Hildbrandt has been huge for the Lancers. The star safety has been excellent this season, including 2 interceptions in their game against Waterloo-Oxford, including a pick 6 in that game. He also had an interception in the championship game

“He’s kinda the vocal leader back there, he keeps the fort steady in the back”, said coach Alex Derma. 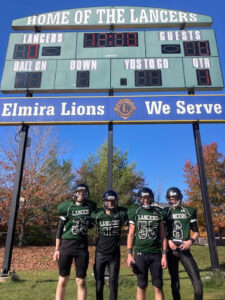