It’s no secret that Bluevale has been dominant in W.C.S.S.A.A girls’ field hockey, winning 7 straight championships and going undefeated this season on their way to an 8th straight W.C.S.S.A.A. championship. The Knights outscored their opponents 49-0 this season, most recently beating Waterloo-Oxford in the finals 4-0.

Coach Tara Macey credits her team captains as “stepping up huge this season.”

One of those captains, Avery Morton, netted 10 goals including a 4-goal game against WCI earlier this season averaging a goal per game.

Two of their other captains, Sydney & Sierra Blackburn, have 19 goals between the two of them, with Sydney scoring at least a goal in every game this season.

Their fourth captain may not show up on the scoresheet, but that doesn’t discredit the contribution from Knights defender Darcey Hilliard, who helped to keep the ball out of the net all season. It’s clear to see that their captains have been big pieces to the team this season.

But their captains aren’t the only players who’ve been huge this season. Stephanie Petrou has been spectacular this season, leading their team in scoring with 12 goals, and getting two hat tricks along the way.

Another key player for the Knights is goalie Gabby Merz, who was perfect this year, getting a shutout in all 10 games this season.

“Our team is filled with loads of incredible athletes and people. We are such a tight nit group and play really well as a team. Everyone puts in the work at practice,” said Avery Morton.

Another thing that the team credits for their success this season is the team’s attitude.

“There is a lot of pressure for our team to do well (because of our past reputation), but we try to keep a positive attitude instead of getting down on each other while still taking it seriously,” said Knights captain and star defender Darcey Hilliard.

Sierra Blackburn touched on their attitude further, stating “Our team is super positive and we are all super supportive of each other. Even when someone makes a mistake, we continue to cheer that person on and encourage them. The bench players are loud and always cheering, which is awesome! Our coaches are positive as well and are a huge part of the team dynamic.”

They moved on to C.W.O.S.S.A. where they won gold in a rematch against Waterloo-Oxford by a score of 4-1.

The following week, the Knights moved on to play in O.F.S.A.A. in Hamilton. They won all 3 pool play games 5-0. They played their quarter-finals matchup on Friday afternoon, beating Saltfleet DHS 5-0. They then went on to beat Medway HS 2-1 to move on to the O.F.S.A.A. finals.

In the finals, they played Holy Cross CSS where they won the championship game by a score of 2-1. This is Bluevales first O.F.S.A.A. field hockey championship win since 2017. 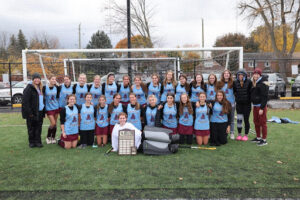