On Monday, December 12th, 2-1 Waterloo-Oxford was taking on the 0-3 Laurel Heights Hurricanes at Rim Park.

Early in the first period, Waterloo-Oxford takes a tripping penalty. But W.O. goalie Eva Collins stands tall, keeping the puck out of the net and helping kill the penalty.

Just halfway through the first period, Waterloo-Oxford keeps good offensive pressure before Megan Haid breaks the ice with a shot from the right circle, making it 1-0 Waterloo-Oxford.

Now in the second period, Waterloo-Oxford’s Kasey Bater steals the puck and gets a breakaway. She makes a great forehand backhand move but the Hurricanes goalie makes an incredible stop. Both goalies are playing really well so far.

Later in the period, W.O. keeping it in the offensive zone and they make an excellent tic-tac-toe play, with Grace Mohr finishing it off for her 4th goal of the season. It’s 2-0 Waterloo-Oxford.

4 minutes into the third period, Lauren Leis walks into the Laurel Heights zone and shoots blocker side to make it 3-1.

With 5 minutes left in the game, Leah Mcphee makes a great play, breaking the defense and putting it top shelf extending the lead to 4-1. That puts her season goal total at 3. Laurel Heights got one last chance with a late powerplay but couldn’t convert. The final score was Waterloo Oxford 4, LHSS 1. 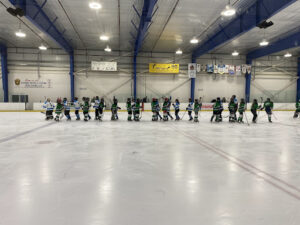